So you’re moving to Canada. Great idea. It is often considered one of the best countries in the world to live. I’m not just saying that. There have been studies. I traveled and lived abroad for more than a decade before deciding that Canada is the best place to raise my family, so I agree. We are a peaceful and educated people. Our climate isn’t the best, but we don’t get hurricanes, do we? We don’t have weird politics and crazy gun-totting militia taking over courthouses either. We do have good institutions, solid infrastructure, sound banks, stable government and a lot of other great things.

There will not be a test at the end.

That is the kind of post this is going to be

Ok, so you’ve moved to Canada. Now that you’re here, now that you’re in the Great White North, you have to know what’s going on. You have to understand what we are saying. Canadians have lots of unique slang and ways of saying things. If you’re going to fit in fast, you better have a boo at what’s below.

In Canada, the children have pencil crayons and toboggans. They learn, in school, that the alphabet ends in zed. The school is a public school not an elementary school. If the teacher is away, sick or playing hooky the kids will get a supply teacher, not a sub. We have subs but those are sandwiches, not submarines, nor are they teachers. Kids will ‘line up’ to get into school, not get in line. Subtle, I know, but who am I to say? You can be in line for a promotion at work, but not at a wicket, which is a kiosk or a booth.

We have girl guides not girl scouts in Canada and once a year, if you are lucky, they will come to your door and ask you to buy a box of girl guide mint cookies. They also still sell the chocolate and vanilla ones, but that is at a different time of year. The mint ones are special.

A college is not the same as a university and we don’t know what a sophomore is.

It’s a bum not a butt, ass, arse or buttocks, a bill not a check, and a cheque not a check. We have elastic bands not rubber bands, taps not faucets, postal codes not zip codes. A holiday is pretty much a vacation, the words are mostly interchangeable and if you are driving to the cottage (not cabin) you will be doing 50 clicks. A click is a kilometre and so is a k.

Don’t let your rad overheat. That will cost you a pretty penny, which we don’t have anymore. We do have loonies and toonies. I wonder often what the rest of the world thinks about that.

Beauty is good. Brutal is bad. ‘Eh’ is a way to check in to be sure you are getting it. If something has ‘had the biscuit’ it means it’s broken, or tired. Maybe it’s been giv’n’r too hard.

My car was at the shop yesterday. The mechanic kept calling me big guy and buddy. That’s not normal. I’m not a big guy or his buddy. I think he’s a little weird.

Things we eat and drink

We love Timmies (not Timmy’s apparently, which would be more grammatically correct). I don’t know when this started, this whole “we love, love love Timmies, but a lot of Canadians go through the drive through at least once a day. They order:

Regular (coffee with one cream, one sugar)

While you’re there, don’t forget to get a box of Tim Bits.

We love our coffee. In the office we might put whitener in our coffee. We will use a serviette to mop up a small spill. Or a dish cloth.

Two quintessential Canadian mixed drinks are a rye and ginger and a caesar. Winter. Summer.

We have chip trucks or chip wagons where you can buy poutine, a fine french food that is slowly making its way across Canada. If you don’t like gravy and cheese curd on your fries, how about vinegar?

At home in the cupboard or pantry you’ll find Kraft Dinner, sometimes called k-d. We have brown bread, processed cheese, Shreddies and homo milk, which comes in a bag. That’s a little strange.

We drink pop, not soda and certainly not soda-pop.

Freezies for the kids and ketchup chips or all dressed for the party.

We eat chocolate bars not candy bars and those include: Smarties, Crispy Crunch, Coffee Crisp, Caramilk and Kinder Eggs, which are outlawed in the USA as a choking hazard.

Homemade or bakery sweets might have icing sugar on top and include: Nanaimo Bars, Butter Tarts, Matrimonial Cake, which is really a date square.

Besides Timmies, (Timmy’s) around town you may want to visit the Sally Ann. It’s kitty-corner to the gasbar which is right across the street from the parkade.

Downtown, you can visit your buddy who lives in a bachelor. It’s just big enough for his chesterfield and the can. It’s small, but he gets a good deal on rent, and hydro is included.

Of course, he used to live out in the boonies where his washroom was a johnny-on-the-spot. Needless to say, when you live in the sticks, you don’t spend much time in the john.

Except for Mountie and Snowbird and maybe Canuck, if you get called any of these, you might want to take (good natured) offence: Canuck, Cougar, Frog, Gino, Grit, Heifer, Hick, Keener, Mountie, Newfie, Pepper, Snowbird and Tool. 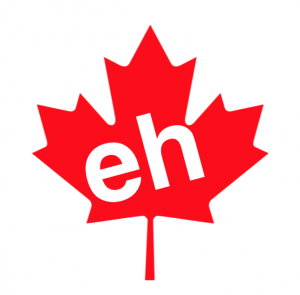 We are not very creative in our nicknames for cities and towns. We have: Cowtown, Hogtown, Gastown, Oiltown, Bytown, Steeltown (the Hammer), T.O., and Winterpeg (the Peg)

Gitch, gotch, or gotchies are underwear. A tuque is a winter hat and a hoodie is a sweat shirt. A house coat is a bath robe. Runners and track pants are what they are. It’s quite an outfit. On your skin you may sport a farmer tan or have a tramp stamp.

We can head out, get turfed out or deke something or somebody out. We can slack off, get pissed off or take off, eh. We can get hammered, pissed, hosed or dinged.

And you never want to get a soaker.

There is lots of regional slang, especially “down east” so this is, by no means, a complete list of Canadian words and slang. But other ones which you will hear might include: Garburator, Rez, Beavertail, Molson muscle, pogey, tad, sasquatch, and chinook