Last week I watched a short video from Paris. It was of a 46 square foot apartment and how it was converted (with pullouts) into a comfortable little home. I’m sure you’ve seen these sort of things before. Here’s the video.

I’d love to live in one, in fact I did (non-converted) at the top of a nine floor walk-up in Paris’ Eleventh District. But that was many years ago when I was living out of a backpack.

Condos are getting smaller and smaller. I recently sold a 600 square foot one-bedroom apartment on Hugo Crescent. I think that is about as small as you can comfortably live.

But as real estate prices continue to rise, and floor space  becomes evermore dear, units get smaller. In Toronto, more than 10% of the condos coming online are around 500 square feet. Most of these are investment vehicles for those (like me) who don’t trust the stock market and would rather roll the dice with property investing which may or may not involve land lording.

Banks don’t like to have all their eggs in one basket. These micro condos are now the source of considerable concern with some leaders and they are looking extra closely at units under 600-500 square feet. I don’t think we have any in Waterloo Region now, except perhaps some purpose built for university students, but what happens in Toronto usually happens in KW too a few years later, so they are coming.

I was listening to one of my favourite podcast earlier this week – Canadaland. They were discussing news coverage of nonevents, Remembrance Day in particular, but general news that comes around every year, like shopping before Christmas, news you know that bubbles up and then is quickly forgotten.

Every year it happens. The first snow of the season. And it happened again yesterday. 170 collisions reported in Waterloo Region. How is it that every year we forget how to drive?

To be fair, there were white out conditions on the 401 yesterday morning with snow suddenly reducing visibility to near zero (as reported from my out of town client). However, the way we drive in this part of Ontario is appalling. Most people visiting from other parts of Canada say so. We are in a big hurry. 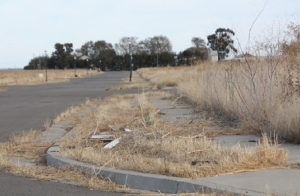 If you have time this weekend, take a short drive through Vista Hills, Waterloo’s newest community under construction. The moonscape landscape of a suburb just getting started is incredibly ugly.

The only thing sadder than a suburb under construction is an unfinished suburb, abandoned to nature. During the housing boom in the USA thousand of acres of suburbs were partially developed and then abandoned after the crash. Now it’s all a big “yuck”. Here’s a great article from the Atlantic.

Written By
Keith
More from Keith
Where do I work again? I received an email from a friend...
Read More

0 replies on “Banks tight on tiny mortgages, snow = crash and zombie suburbs. This is the Marshall Report”