I love visiting Toronto in the summertime. Spending four days in New York, or Taipei, or Boston, Vancouver for me is far preferable to spending it camping or at a beach resort. I suppose this is one reason that I have been a proponent of the LRT. I have urban tendencies. I suppose this is one reason I connect so well with people moving here from San Francisco, the GTA and other urban environs. I’m one of them. I moved here twenty years ago from Taipei. In this week’s news, I mention Toronto and I mention Hamilton and Brooklyn. We are becoming an urban destination and I for one think that’s great.

KWAR released the sales numbers from March. Here’s some statistics:

BuzzBuzzNews Canada had a question for me in regards to a story they did on High Speed Rail to Toronto. “Even before this announcement, the Waterloo housing market has been seeing a surge in activity,” Waterloo-based realtor Keith Marshall tells BuzzBuzzNews. “A lot of people who can’t afford the GTA market are looking here, and a rail line would only add to that demand.”

What are Nightingale Floors?

For centuries, Japan has taken pride in the talents of its craftsmen and carpenters. Because of that, you might be surprised to find that some Japanese castles have extremely creaky wooden floors that screech and groan with each step. Nightingale floors were used as a countermeasure against spies, thieves, and assassins. By accounting for the size of the noise and the direction it was coming from, they could even be used to help pinpoint the interloper’s position.

I have them in my 100 year old house in uptown Waterloo.

Some Realtors, myself included say that in terms of real estate, whatever happens in Toronto, eventually happens here too. It used to be a two-year lag but I’m certain that time has shortened.  I’m not talking about upticks and downturns specifically, but general trends. One of those trends is the importance of home staging. This article talks about that, but before you don’t click on that, my favourite real estate blogger is mentioned in the preamble with this quote —> “51 per cent of the licensed agents did one or fewer transactions. The average agent completed four transactions and spent $10,000 on marketing themselves and their listings”.

The University of Waterloo announced the launch of the Waterloo Artificial Intelligence Institute, aiming to provide a platform for startups and established companies to leverage the university’s AI expertise and enhance their own AI capabilities. 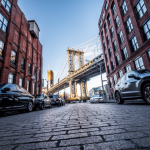 Brooklyn is commuting distance to Manhattan. As Manhattan became too expensive for most people, Brooklyn became the place to buy.

Two things are important to the Brooklyn Effect:

There’s more. You can read here about how Hamilton last year experienced the “Brooklyn Effect”, and I suppose we are seeing early signs of the Brooklyn Effect here in KW.

In the Brooklyn Effect, the first wave is reluctant to leave their urban environments.They bring urban sensibilities to sleepy second tier cities or neighbourhoods.

The second wave arrives once the infrastructure is in place and then the third wave moves in and this eventually creates another Manhattan.

New research reveals that attaining the American dream is far more likely if you live in three countries outside the U.S. Those are Canada, Denmark and the UK.

One of my subscribers recently wrote asking why I do not publish the Kitchener Waterloo Real Estate News more than once a week. I used to. There certainly is enough real estate news. Truth is, I would like to publish more often, but I also want to be consistent. I like having a regular schedule so I can have a rhythm of gathering, writing, publishing. And you dear subscriber have the assurance that every Wednesday afternoon there will be an email in your inbox.

I was recently reading this article about why it is better to read the news a day or three after it’s published. A few days time has the ability to separate what is novel and interesting from what is really important. So that’s another great reason. Let’s go with that.

These Regions Offer Some of Ontario’s Most Affordable Real Estate