I woke up this morning dreaming of a hamburger. I never dream about food, (well, I can’t say that anymore). Why a hamburger? Why now?

Five weeks away, I suppose, and eating nothing but Asian food. Five weeks since I could pop out for a slice of pizza or a burger or a burrito. Well, I guess I could do that here in Taipei, but why would I?

I love Chinese food. Taiwan has the very best Chinese food in the world. For a few years they were even advertising a kind of foodies holiday paradise as part of their big tourism push.

That has all died down now. But the food is still awesome.

We are back in Taipei for a few days after spending the last two weeks in the south, visiting fishing harbours and mountain trails and valley towns – hot springs, beaches, hiking, drinking coffee. I’m not a foodie, far from it, but since I’m here, I’m going to continue to enjoy as much and as many different kinds of street food, stall food and casual dining as I can.

And then, first thing back in Canada, I’m getting a cheeseburger!

How Kitchener and Waterloo are dealing with Airbnbs

Last month, Toronto’s city council approved new short-term rental rules, stating people can only rent out their primary residences for 28 days or less. The regulations were put in place because of concerns about rental availability and the explosive Airbnb market. In Kitchener Waterloo, there are about 300 Airbnbs. But so far, neither city has regulations specifically aimed at short-term rentals.

The best real estate advice from 2017 from Realtor.com

“Tech cities” in the news

According to a new report (2017 Scoring Canadian Tech Talent), Ottawa’s tech sector is second only to Toronto’s, and it’s having a noticeable impact on the local housing market.

In the Kitchener-Waterloo-Toronto technology corridor, the often overlooked region of Halton, home to more than half a million people living in the cities of Burlington, Oakville, Milton, and Halton Hills offers a wide variety of untapped innovation.

Waterloo Region punches well above its weight when it comes to attracting programming talent, according to a Brookfield Institute report. Kitchener Waterloo has one of the highest concentrations of developers of any Canadian city. While the region ranked seventh based on its number of developers, it moved into fourth when taking into account the size disparity between regions – behind only Toronto, Ottawa and Montreal.

To see the future of your city, watch the curb

What your municipal governments do with the curb sets the tone for your whole city. Is it a place for walking and loitering, dining and lounging, picking up a Uber or ride share? Is it for public transportation? A bike lane or a loading zone for delivery trucks? 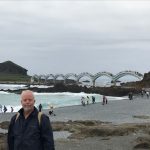 This brings us to the end of 2017. I’m going to be in Taipei for a few more days, then four different airplanes before I’m home — Victoria for Christmas…the next two weeks is all about traveling and holidays and food. Can’t wait to get my hands on that cheeseburger!

Merry Christmas. Happy holidays. See you in the new year.

Written By
Keith
More from Keith
It was cold overnight, below -20. Coldest day of the year the...
Read More