I’ve been busy the past ten days with a townhouse update project. I’ll be busy for another ten days at least. It starts with a walk through. Needs paint, new floors, baseboards and trim. And while we are at it, doors. Then, should we put in a new electrical panel? Replace the baseboards with a new furnace and A/C? 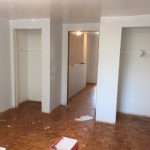 I’m at the painting phase now – painting is easy if you know you are getting new floors.

The plan is to have it on the market on March 1.

Here are the highlights of the January KWAR statistics

Waterloo is the only local city that licenses landlords. Annual licences are renewed for $204 to $413 a year. Between 2012 and 2016, Waterloo licensed 3,782 rental units, charging landlords $6.3 million in fees that the city says pay for enforcement. Landlords must pay further fees for various inspections. Now Waterloo landlords can impose big rent hikes to make tenants pay the “extraordinary” costs of rental licensing, a court has ruled.

Auburn Developments, known in Waterloo Region for its redevelopment of the Arrow Lofts on Benton Street and The Barrel Yards will develop the land for a mix of residential, employment and green space.

With support from the Southwestern Ontario Development Fund, Miovision has moved to Catalyst137, a new Internet of Things innovation centre in Kitchener.

The proposed project located on Erb Street West near Ira Needles Boulevard, is set to include two 13-storey apartment buildings, along with a set of stacked condominiums, which can include up to 499 bedrooms.

While Ontario landlords are looking to ban marijuana use in their rental units and several municipalities don’t want legal cannabis stores in their neighbourhoods, a recent U.S.-based study suggested that recreational pot could lift property values. Property prices for homes in Denver near shops which converted from medical marijuana to recreational pot in 2014 saw values increase by 8.4%, compared to those slightly further away.

7 Things that will wreck your roof

Unless a problem arrises, we usually don’t give our roof a second thought. It is however one of the most important components of your home. It is the cover, the lid, the overall protector of you home from the winter weather, the wet spring weather, the windy autumn and the heat of the summer sun. Here are some things to think about when you think about your roof.

RBC is investing $1.78 million into a cybersecurity research lab at the University of Waterloo

This partnership will leverage Waterloo’s unique capabilities in mathematical science as it applies to tackling increasingly sophisticated cyber attacks.

CryptoWorks21, a research program focused on post-quantum cryptosystems, will also be supported.

Swiss-based startup StartupBlink, which is working to develop a map of the global startup ecosystem, has released a report ranking Canada’s ecosystem third in the world.

Rents are rising. But this list of least expensive and most expensive cities for apartment rentals in 2018 has a few surprises.

5 of the most dog friendly cities in the world

Did you know that in Seattle there are twice as many dogs as there are children? If your dog needs a vacation, check out these fun fido facts from a local blogger.

I had the weirdest experience recently. My wife and I went to a dinner party and all of the food was just like home. The chips, the dip, the crackers, the meat, the veggies…everything. Everything was from Costco, just like home.

We are a Costco family too. Now that the new Costco opened in Waterloo, it is so close that one of us is there at least one a week. I might stop over to get some gas and then go in for a few things — it is nice and quiet on a Monday afternoon, or a Wednesday morning (though I still run into someone I know, more times than not).

It is a clunky way to get groceries. Everything is oversized. You really have to commit before you buy that giant jar of olives or package of ground beef, or party-sized bag of potato chips. You have to know that this is an important purchase, you are going to have this product in your home for a long time.

But I don’t care.

I toss it in the cart.

I know that my family can get through anything, (especially a large box of croissants, or 100 bags of Earl Grey Tea). Shopping at Costco for me is the one time that I’m not a minimalist — it’s the one time that I am a maximalist. I’m on safari, an expedition, I’m stocking up, maybe so I don’t have to go outside again until spring.