Before I became a Realtor, I had no idea how seasonal real estate is. Not only do 60% of the homes sell before the end of May, (which is really something if you consider how slow January and February normally are), but Realtors too behave in cyclical ways at different times of the year.

Case in point, this is, for most Realtors, the time we think about generating spring business. And what better way to do that than through those old trusted and proven techniques such as mass mailings. So far, this year I’ve (only) received three postcards inviting me to find out the value of my home, but I’ve also received a notepad, which is always handy and a flyer informing me of six homes these agents sold and for what percentage over list price they sold those six homes for. They didn’t tell me of the homes that they didn’t sell or sold for below asking price or when those six homes that sold for over asking price did so, but completeness of information is not important in real estate, is it?

I’ve noted that all five mailings so this year that I have received have come from the same brokerage. Different offices, but the same old same old from at least one brokerage.

I was out with an investor client on the weekend and he asked me if last year’s appreciation in real estate prices in Waterloo Region have led to higher rent prices. Here is the answer. According to a new report from PadMapper, Kitchener has the fastest-rising rents in Canada. The average one-bedroom in the Kitchener now costs $970/month which represents an increase of 15.5% from this time last year, and 1% higher than last month. For two-bedroom Kitchener apartments, rents rose 15.1% year over year.

First, there’s no such thing as a “Canadian real estate market”. You buy one home on one street in one neighbourhood in one city. What happens in Canada’s largest and hottest housing markets, Toronto and Vancouver is quite different from that in Kitchener-Waterloo. That said, here are the trends

If only because of the political climate and the “America First” economic ideology currently prevalent in the USA, Toronto (and by extension Waterloo Region) has near zero change of becoming Amazon’s second headquarters. It’s too bad that we will not be part of a $5billion investment into our local economies and have as many as 50,000 jobs added. But it is really a good thing that our home prices will not have a sudden spike in prices of at least 10%. We don’t need that, again. (A lot of home owners would disagree with that statement).

It is fun to dream though and I’ve been reading a lot about it. Here are some links from:

Your month by month guide to maintaining your home

“Everybody wants to build”, the saying goes, “but nobody wants to do maintenance”. But, it is important. Nothing lasts forever. It is better to do a little at a time, clean as you go than to let things get out of hand. With that in mind, here is a month by month schedule to help hinder your avoidance and get you on track to successful home ownership.

BlackBerry has soared by more than 20% in the past month, leaving some cryptocurrencies, including bitcoin, in the dust. BlackBerry has been successful in reinventing itself  as a software and services firm focused on cybersecurity, playing on its reputation for building an ultra-secure messaging system.

Some predictions for Canadian home prices and mortgage rates 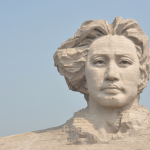 Not another roadside attraction

Everyone knows about the Statue of Liberty, the Easter Island Moai heads, Mount Rushmore and the Sphinxes of Ancient Egypt, but colossal statues of even larger proportions are still built all over the world and though some of them are among the world’s tallest statues, they are virtually unknown. Here are seven built between 1994 and 2017.

The Waterloo Region Record announced last week that they are again erecting a wall to prevent readers from reading their newspaper, — again — this is their third attempt, maybe fourth. Visitors will be able to read six stories per month free of charge and then the wall will go up.

I used to work at the Record, not for the Record but for Grand magazine. It was Torstar’s first successful local attempt at a magazine for many years. But that is an aside. I only mention it because I was in the business, starting at the Guelph Mercury — a paper Torstar closed down about two years ago.

Newspapers are still here. They still have value. But two decades ago, I think we can all agree that they missed he boat when the internet came to town. They changed and are changing, but really they are yesterday’s news.