Numbers lie. It is hard to grasp what is really going on just by looking at the numbers, especially the numbers reported through our local real estate association and media outlets. The statistics are very complex and the market is fluid – there are always buyers and sellers (and houses, townhouses and condos) entering and leaving the market.

Having said that, given enough time we can understand what the market is doing. A mid-year year to date is in order.

Here are the facts

There are currently 2545 active listings.

There were 6394 listings added between January 1 and June 30.

39% of the active listings expired or were cancelled. That means 39% of homes listed did not sell. That is a high number but that is a raw number. Sometimes (after at least 60 days) a listing is cancelled and re-listed and later sells. This 39% is consistent with the last time I did this exercise. Then, I was surprised by such a high number of listings not selling. But it is raw data and it includes homes listed for sale by builders and developers – this group skews the data up in a number of areas. 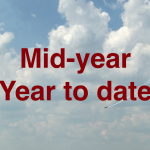 The conclusions that I draw from all this are

1) A lot of houses don’t sell. Somehow we are conditioned to think that every place sells, but clearly more than 1/3 don’t (at least not the first time).

2) There is a cyclical nature to real estate. Winter sales are slower probably because the christmas holidays skews that data.

3) There aren’t as many houses on the market as I thought. Of course, I live and breath real estate, but when I see that there have been just over 6000 homes listed this year I think, “I’ve been in 10% of those”. I haven’t, but it seems that way.

There was a great article in the REM Online called “understanding condo price increases” which demonstrated how misleading the reporting of real estate statistics is.

These Regions Offer Some of Ontario’s Most Affordable Real Estate