In the last Marshall Report, I pontificated a bit about the new licensing bylaw for Kitchener businesses. I said that protecting the consumer from itinerant roofing and paving contractors was a great idea in theory (but a lousy idea in practice). Little did I know that Waterloo was voting on the issue.

I’m both prideful and boastful to say that I’m not alone with my apprehensions. I’m sure that the bylaw (now passed) will require more staff and more staff means more money. The city says that the bylaw will bring in more than $560,000 in revenue and that will more than pay for the staff but my argument to that is that that is money out of my and every other resident’s pocket – in one way or another, the new licensing fees will get passed on to the consumer – that’s me and you, brother.

I don’t like bureaucracy. And I don’t like fees. I think in this day and age – the internet age – there is a better way to protect consumers.

I heard from my pal Dave, Waterloo’s next mayor, on the issue. Why he reads my blog I do not know. He said:

– Eventually, this License information will be available via open data.  Homeowners, who have a mobile vendor come to their door, will be able to easily check the if the company is licensed in their community.  Or report a fly-by-night organization.

– And by streamlining, the costs to run the program will be minimized, so that it is not a burden on the taxpayer (self-sufficiency).

He’s a smart guy, eh? I can’t wait to start seeing the Vote for Dave Jaworsky signs going onto lawns around Waterloo

Say “hi” to your neighbour

I lived in Taiwan during a very transformational time. It was 1989 (through to 2000) and the economy was going strong. The government was becoming democratic. Trade was becoming free. Taiwan was opening up after 40 years of martial law and the “white terror”.

During this time, the government launched many successful public service campaigns. The first one was “it is polite to line up for the bus”, instructing people to form a queue to board a bus. Another, a few years later was, “say hi to your neighbour”, telling folks that neighbours aren’t to be feared.

In Canada, I’d blame the long winters but neighbourly relations are disappearing in USA, Australia and the UK.

I’m not suggesting that the government should start a public service campaign. Although in Taiwan the lining up for the bus campaign obviously worked, I’m not so sure the say hi to your neighbour did.

The article argues that government (well, politics) is part of the problem. Politics is divisive.  But that is not all. The internet may be the cause of and the answer to all of our problems, the article argues.

Anyway it is an interesting article. Here are some quotes:

For decades, Americans and Canadians have been steadily less likely to vote, to play bridge, to volunteer, to invite people over for dinner, to join parent-teacher groups or local organizations the way previous generations did—from the Rotary Club to bowling leagues.

The evolving modern definition of a good neighbour is no longer someone who is part of your life, someone you chat with over the fence, a reliable shoulder in good times and bad, but someone who doesn’t bother you, either in your enjoyment of your home or by threatening its property value.

TriTag tears Jay a new one

The anti-LRT soap-boxers are still at it. A candidate for regional chair wants to kill the project, a project that starts construction next week. He wants instead free buses for everyone. That’s not right. That does not make any sense at all.

Of course the most visible and vocal opponent – Jay Aissa – is still campaigning against it. His opposition has given TriTag a wonderful opportunity to give us the facts and pwn the poor guy. That’s right, pwned.

Here are a couple of the facts

The 17 km/h claim is false.  The light rail vehicles Waterloo Region has purchased can travel up to 80 km/h, though they will  obey posted limits. In the heaviest pedestrian areas, this shouldn’t be less than 20-25 km/h. Average speeds for travelling the corridor end-to-end (including time for stops) is estimated at 29 km/h – this is almost as fast as Toronto’s subways, and substantially faster than their mixed-traffic streetcars.

Mr. Aissa’s numbers aren’t grounded in any reality. Using census data as a baseline (updated every 5 years), the Region uses building permits, vacancy, and school enrolment rates to carefully estimate annual  population growth. In 2012, the Region grew by 4,500 people, in 2013 by 6,600, and in 2014 it’s projected to grow by another 6,000. Long term projections of Regional population growth, performed by the province, were recently increased from 729,000 to 742,000 by 2031. 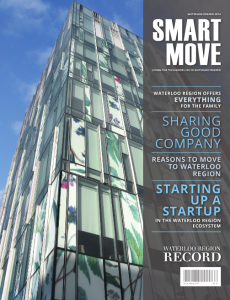 The best decision you have ever made

I was quoted in the Waterloo Region Record/Communitech publication Smart Move magazine. What I said was moving to Waterloo Region may be the best decision you have ever made.

Written By
Keith
More from Keith
Today is Saturday September 30 and this is the sixtieth episode of...
Read More