There is more and more talk in the real estate news about gentrification of older, inner city neighbourhoods. I’m all for gentrification. I’m for a lot of things: including but not limited to leash-less dog parks, redheaded Chinese girls, pumping gas at American gas stations and Tim Horton drive throughs for lunch. Nothing is going to appeal to everyone all the time. That’s life. That’s progress.

A lot of people are against gentrification. They argue that the recent interest in urban living is displacing the poor and although these naysayers may be right, there is a bigger issue at hand with this demographic shift. We are creating a frangible future on the fringes of our cities. Suburbs are becoming the new slums.

If you are 40 years old or older, you likely have some recollection of when the pendulum swung in the other direction.

Here is a history brief: 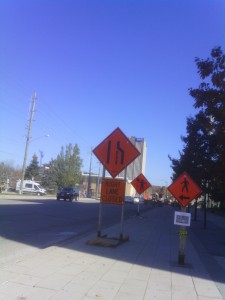 The cities started losing residents to the suburbs in the 1950’s when the automobile became king, king of the road. Having a little bungalow or back split in the sparkling new suburbs with a big Buick or Pontiac in the driveway started to become everyone’s dream. Then in the 1960’s with it’s turmoil and social unrest, cities became dangerous and dirty and the flight to the suburbs really took off. Suburban malls were built near suburban homes and this lead to decaying retail revenues in city’s retail core. It was a downward spiral. The cities continued to slowly die from the inside through the 1970’s and 1980’s. In my UpTown Waterloo neighbourhood, the old timers tell me that in the 1980’s and 90’s only old ladies and university students lived on my street. I’m sure that is true with other streets in other cities too.

But now that has changed.

History does not repeat itself, but it rhymes. In the past 20 years, cities across North America have seen rapid reversals of fortune. It seems that the pendulum has swung the other way. Everyone wants to live in the city centres again.

Conversely, suburbs have lost their allure. Young people don’t want to commute. Car ownership, once a right of passage is now seen by many as a (necessary) evil. None of this bodes well for suburbs. With the money rushing back into the city, it is leaving the suburbs. Young home buyers don’t want to buy the kind of house that they grew up in. Side splits and back splits have fallen out of favour and with that so has the inner suburbs.

The outer-suburbs are still growing, but gone are the days of 50 and 60 foot lot frontages. The outer suburbs seem to be growing as quickly as they did when I was a kid but now in the suburbs, developers are building high density stacked townhouses of 700 square feet for a one bedroom and 1500 square feet for a three bedroom. Now there are row houses in the suburbs and low rise condos.

New Canadians (who like to buy new) are settling in the ‘burbs, isolated from most shopping and services.

I work with a lot of first time home buyers, most realtors do as they make up more than a third of all home buyers. Many of them want new and that is understandable. A new home, like a new car is something to be proud of. A new home is good for your ego. When you invite your friends over, you are showing off your open concept, granite counter-topped modern comfortable home. There is nothing wrong with that.

Of course, some of my first time home buyers reluctantly buy in the burbs. They would rather be downtown, but simply cannot afford it. As the inner-cities redevelop, develop once again, anew, prices go up, squeezing out many young people.

So, some suburbs are becoming what they were originally designed to replace. I hate to be a downer, but with all this talk about gentrification, I think we are missing the real issue – slumification.

Buying in the suburb

For me, the neighbourhood is the most important thing. A nice neighbourhood, will likely lead to a good school, great neighbours and a happy life. Being close to shopping and transportation is important too. It is the neighbourhoods that are being built in the middle of nowhere that have the highest risk of becoming, ah, not so nice.