I met some new clients the other night. They had originally contacted me through the chat widget on my website. When we met, Sam said, “I read your book. When did you write it? Do you still agree with everything in it?”

“Oh oh”, I thought. I wrote it over a three month period a couple of winters ago. I don’t remember. I said, “I’ve probably softened in my views against condos. I’ve worked with a lot of people buying condos in the past couple of years and condo living certainly has some great advantages”. Other than that, some of the stuff I wrote for home sellers might have changed as well. It is a seller’s market after all right now in Kitchener Waterloo.

But just like blog posts, books represent a moment in time. I’m not about to go back and update that book just yet to accommodate new market realities or changes in values. Instead I’ll keep on writing here and on my other blogs.

A lot of what I write here and on my other blogs is a matter of opinion. We all see the world through our own eyes. We base our ideas on what we’ve learned so far through our own experiences and those of those around us. Many of our friends and family members have sold a house before, many more have been involved in buying a house (or condominium apartment) before. Everyone knows someone who knows someone that has bought or sold a place. We gather up these little snippets of knowledge and form opinions and get ideas from them.

Berated by the banker

Fortunately, my client is very strong willed and stood up for herself. She did not appreciate being berated and I suppose she trusts her agents as real estate experts over those of people not working in the industry every day.

Even when home sellers or buyers have an agent, they troll through real estate websites (like mine), testing what they know against what I think. If I discover that they have an agent, I usually ask them to direct their question to their agent or their agent’s Broker of Record.

Note: Agents work for brokerages and brokerages’ agents are hired by clients. The client’s legal relationship resides with the broker, not the agent.

Lightening Bob and who knows who

I used to work with a guy who, when he was a kid, was struck by lightning. He was on his front lawn at the beginning of a summertime Ontario thunderstorm. He was running across the front lawn and the lightning struck him in the head, travelled through his body and exited through his foot. He was fine. He said the next day, puberty hit and he blamed his extreme hairiness (and horniness) on the lightening strike. Other than that, I heard him say that it was both a shocking experience and an electrifying one, when he told the story, which he often did.

Not everyone knows someone who has been struck by lightening. But.

These are outliers and exceptions and urban myths. We don’t know the whole story and we don’t even know if the story is real. But these examples become real in the minds of home sellers and home buyers. 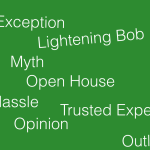 The myth of open houses

A real estate news site I like to read said this about open houses:

Everyone has a friend who bought a home at an open house, yet only a very small percentage of homes sell to people who come through open houses. We never really know if they would have seen and purchased the same home even if there was no open house.Yet there are sellers who are sure they need frequent open houses. The only reason I ever do an open house is because the seller believes in them.

For the record, I’ve noticed that when I do open houses on Sunday afternoon, on Monday morning I get a couple of phone calls from agents whose clients came through the open house.

I have a roundabout way of writing sometimes. Often the idea that I’m trying to explore does not really come out until the story is told. This blog post is one of those times.

The point I hope I made is that unsolicited advice is free and free advice should be suspect. You should trust your trusted advisors but only if they know what they are talking about. We also have to question the beliefs we believe to be true. They may be false.