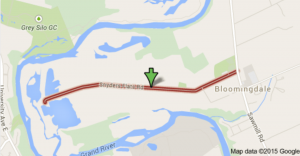 Snyder’s Flats is located just north of Bloomingdale, at the end of Synder’s Road (image that), just off of Sawmill Road. It is in Woolwich township just across from the city of Waterloo. It is across the Grand River from Kaufman Flats and Grey Silo Golf Course.

What’s interesting is that Snyder’s Flats has long been a place for recreational outings. In the late 1800’s large groups of residents from Berlin (Kitchener) and Waterloo would cross the river to picnic at Snyder’s Flats. In fact, many cottages were constructed along the Grand River at that time.

There were calls for the township to build a bridge there – from Kaufman Flats to Snyder’s Flats, but the township didn’t see the need. Instead, the local residents constructed a small pedestrian bridge that didn’t last long.

For many years Snyder’s Flats was Waterloo Region’s unofficial off leash dog park. Then in June of last year the Record reported that the leash-less dogs were a problem and extra staff was going to be added to enforce the leash law. Tickets of $95 would be written for anyone caught walking their dog without a leash. Repeat offenders would be banned from the area. Bummer. A petition was started.

Curb appeal is vital for attracting perspective homebuyers. House shopping is really a process of elimination. I’ve been out house shopping with people who…