I studied Mandarin at Feng Chia University. It was interesting and confusing and because it was in Taichung Taiwan in the early 1990’s it was like being lost at sea.

Bobbing happily in the disconcerting sea. 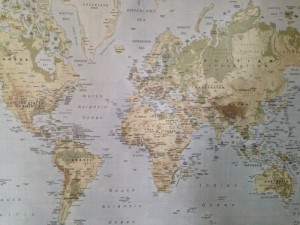 Some nights, I could see the stars and I thought I might know which way north was and which way I was headed. Some days, I could make out the shore line and thought I had an idea of where I was. With Chinese, I mangled the tones, broke the grammar; I misread the radicals, studied stroke order, practiced the characters over and over again, memorizing many, forgetting most. I was making progress, two steps forward, one step back, writing all of it down, with books and notes and flashcards.

All in all, I was mostly lost.

House shopping is kind of like that. Homebuyers are always trying to find their bearings, trying to gain insight of where they are, what homes are worth, where they are trying to get to, separating their wants from their needs, officiating the battle of the ego and the id. They are working with different kinds of houses in different neighbourhoods, different sizes, styles, features, amenities, school zones…the combinations and permeations, like the menu at an all-you-can eat sushi restaurant, are nearly endless.

We are used to inductive, deductive and creative analysis, making assumptions based on historical data. It’s how we go through life, comparing dissimilar options or products or futures or kinds of fruit. But like the so-called science of economics, we have to hold some variables as constants. That’s unnatural. Variables aren’t suppose to be constants. That’s why they are variables.

What did they buy it for?

As realtors, we have the historical MLS information on houses. We also have access to the title information (and hence the previous selling price) of most houses. Home buyers sometimes want to know this and we are happy to provide it. If you want it, you got it.

What are you going to do with it?

Unfortunately there aren’t any formulas for “they bought it in 2001 for $196,000 so that means its worth $389,700 today”. Sorry, that’s BIG DATA and you can’t do that with the information you have. You are going to need more data, bigger data.

Of course it is easier if the poor sap bought it last year and he has to sell it this year. If I read in the newspaper that prices have gone up by 5% since last year, that means it must be worth 5% more, right?

Third. Would you be interested in what someone paid for a home if the market was falling? How relevant is a historical transaction? Only an economist can answer that question.

What is the assessment amount?

Real estate listings list the assessed value of homes for sale. How valuable is this information in relation to the market price?

The assessed value is irrelevant unless you are comparing two similar properties in the same neighbourhood. Then it is only a little relevant.