I had lunch with an old colleague last week. He’s in his 10th year of being a real estate agent and I’m in my 8th. He is the reason that I initially joined the brokerage that I joined, the one that I’ve left now for TheRedPin. We had lunch because I showed one of his listings and then had some questions. In the back and forth texting that we did over the couple of days that followed, he said, “Let’s have lunch some time.”

I’ve learned to say, if I really want to have lunch, “sure how about Wednesday (or Thursday…)”. If you just say “sure”, then it never happens.

So we had lunch at Thai Bistro in Belmont Village.

He was coming from morning prospecting. He’s a door knocker, an old school prospector. I was going to a meeting with a real estate investor afterwards who had contacted me through my website. I’m a blogger, an information age permission marketer. My old buddy and I had 45 minutes to catch up. 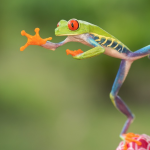 So I asked him how things were around the old office and he told me that he rarely goes in anymore. He said that when he does go in, he feels like a stranger. There are always a lot of newbies hanging around real estate brokerages. We were no different a near decade ago. The brokerage office is the shallow water where the tadpoles hang out together and try to learn how to be frogs.

Frogs don’t have much time for tadpoles. That’s a job for the broker and the trainers. Frogs sometimes eat young tadpoles.

Anyway, my buddy said that he didn’t even know for months and months that I had left the brokerage and joined a Toronto firm. Ours is a solitary profession. It is a marathon, no it’s a triathlon, where you’re only really competing against yourself.

Restaurants fail. Sometimes quickly. Sometimes it takes a while. Sometimes they make it because they are lucky, in a good location, have a good chef and menu, or have tapped into the mood of the patrons. Something like 70% of restaurants fail in their first five years.

Something like 70% of new real estate agents are not still in the business after five years. Some of us get into it for the wrong reasons (freedom to make your own hours, tired of working for a company that does not appreciate your talents, as a hobby/sideline/revenue stream, laid off or fired from previous job, promise of BIG money success…). The ones that are successful, a broker once told me, are the ones that have been successful in their previous jobs. The ones that fail, have struggled and failed before.

Realtors join the brokerage that offers the promise of great training

Most new real estate agents quickly realize that they have a lot to learn. They often join the brokerage that offers the best training. They start their career here, learning what they can learn.

When I first got into real estate, I thought, “everyone lives in a house, townhouse or condo apartment. Everyone is my target audience.” For a new agent, real estate is a big road to wide open spaces. New real estate agents are like pioneers, going west, sod busting and manifesting destiny. At least thats the way I see it now, looking back.

In the first two or three years, you absorb all you can and test it out. You find out what works and what doesn’t. You learn to prospect, to market yourself, to leverage listings and open houses and you find your path to success or failure.

My old colleague, like me, really wanted to succeed in this business. Unlike me, he really threw himself into real estate sales training. He joined everything and learned from the pros. He did conference calls with sales trainers, He set up SMART goals. He developed a system. He became accountable… Around the office, in the early years, I’d ask him what he was doing to generate business and what he’d learned. He didn’t share a lot. Back then we thought we were operating in an environment of scarcity, Back then, we kind of thought that we were competing against each other. However, he once told me that one of his real estate sales trainers had told him to set up three pillars to build his business upon. With so many possible ways to market and prospect for for real estate clients, deciding to do three things and only three things would prove to be the key to success. The fact is, if you try to do everything, you are going to be spread too thin. If you only do one or two things and you are not consistent with them, you are not going to succeed either.

There are as many different ways to succeed in this business as there are types of agents. New real estate agents have to try out what suits their personality, test the waters and find out what works for them. Here are some possible pillars:

For sale by owner prospecting

Working with a builder or property developer

There are as many ways to succeed in this business as there are types of relators. The short list above is just top of mind kind of stuff.

So that was lunch. We talked about listing presentations and referrals. We talked about consistency and how something you did two years ago might lead to business this year. It’s true that everyone is a potential client but a realtor has to find his way.

The one thing I would have done differently

The one thing I would have done differently would be that I would have joined a team. It’s counter intuitive really because as I said above, real estate is a solitary profession, but I think now looking back, I could have covered a lot more ground along the learning curve if I was part of a good team.

Looking for a new agent

My brokerage is looking for a second agent for Kitchener Waterloo. With my sales manager, I’ve discussed what the perfect candidate would be. We’ve decided that we need a new agent who really wants to work in the business and is eager to learn.