Today is January 5, 2016. This is the first episode of the Marshall Report. Welcome to the podcast.

I’m going to be more consistent with things this year. This is my resolve.

In this episode I will talk about:

One – Six weeks in Southeast Asia

I had the time, money and resolve to take off for six weeks and bum around Asia. I wrote about it here. It was time spent drinking coffee and dodging coffee, eating pho and traveling by every imaginable kind of transportation. Bus, boat, minibus, bicycle rickshaw, motorcycle rickshaw, train, plane and automobile taxi. I learned the value of a good book and a good night’s sleep. I’d like to say that I am fully refreshed and ready for the spring real estate market, but honestly, I enjoyed my time away so much, I am reluctant participant in real life for just a little bit longer.

Two – Question of the week:

Question: How can I ask my neighbour to sell me his house?

Answer: The best approach, I think is a little indirect. I would approach the neighbour, and say something like, “You know, I really like this neighbourhood, (give reason here, like) but my house is just too small. Do you know anyone who is thinking about selling?

That is pretty soft and simple.

If you really like the neighbourhood, another thing you can do is contact a realtor and have him set you up with a neighbourhood watch. That way you will alerted as soon as a new listing goes on the market in your neighbourhood.

Waterloo has a new coffee place and if you are like me, or if you are young and good looking, or if you’re a hipster, or if you lover great coffee and a really cool atmosphere, then you have to try Settlement Co. It is just north on King and Erb. I wrote about it last week. Here is the link to a blog post I wrote about my experience going there for the first time. It won’t be the last time.

Here is an issue that just doesn’t not want to go away. A couple of years ago the City of Waterloo enacted a new bylaw aimed at cleaning up our local residential real estate rental mess. Specifically, many believe, aimed at student rental accommodation and more specifically at absentee landlords.

Here’s a news flash. Toronto area investors think KW is cheap. It was, and they bought income streams here. They rented them out and tried to maximize their profits with a minimum of effort. The licensing requirement cut into their profits so what do they do? Pass the fees along to the renters in the form of higher rents.

Nice. The city brings in more money and hires more staff, keeps the ESA and HVAC guys busy and the poor renters get an 8% increase in rent.

It is all legal. Although the provincial guidelines for rent increases for 2016 is 2%, if you’re a landlord willing to fight at the landlord tenant board, you can get more. Here is the link to the story.

Names seemed to be in the news last week.

There were the deaths of Meadowlark Lemon and Lemmy. There was the girl named Isis who had her facebook account blocked or taken down. And for some reason we always like to talk about baby names and I suspect that due to the popularity of our new PM, we will have lots of Baby Justins coming up this year.

It got me thinking about real estate, of course. We have a new school that will start construction soon in Vista Hills, Waterloo’s newest neighbourhood. The school is going to be called Vista Hill Public School, not very imaginative. If the internet had of gotten its way, it would have been called James Bond Public School – a much cooler name.

It is a shame that Lennox Lewis Way is in a forgotten industrial park. What’s up with that?

I guess the square in front of Kitchener City Hall is now Carl Zher Square. Nice tribute. No offence, but shouldn’t we wait ten years or something before we start naming stuff after you.

I wrote a little more about some oddities of our local naming practices here.

Six – Is that a mouse in your house?

A baby lion or bear is a cub. A baby dog is a pup and a baby cat is a kitten. So what do you call a baby mouse?

I bring this up because I was speaking with a home inspector a little while ago. He found evidence of a mouse in a house some young clients of mine had purchased.

I live in an old house in uptown Waterloo. I am always catching mice. I use humane trap where they can go in and then a door shuts behind them.

I said to the home inspector, that I get mice in my basement every autumn. But he said, ‘no, you always have them. It is just in the summer they go in and out to forage for food. In the winter they forage indoors where it is warm.

What do you call a baby mouse? 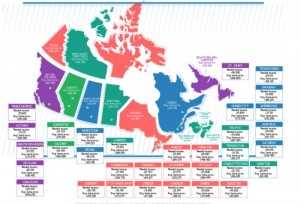 Seven – How expensive is in to buy a house in relation to other Canadian cities?

I’m not that interested in where the most expensive or the cheapest place to buy a house in Canada is. I am only interested in Kitchener Waterloo. Here is a graphic that is mildly interesting.

Eight – About that half-marathon

This has nothing to do with real estate, but as I spent more than a week in Bangkok recently on my six week trip through Southeast Asia, I thought I could comment.

First of all, I first went to Bangkok in about 1987 so it has changed a lot in the past 25+ years. So, this is an ‘emerging country’ problem.

The Bangkok half marathon which was too short the previous year due to a last minute route change ended up being too long this year. When I say this year I mean 2015. The reason is that officials directed runners to take a wrong turn which added over 6 kilometres to the route. A half marathon is usually 21.1 kilometres but this year in Bangkok, you got the big half. It was 27.6 kilometres.

Is my GPS watch working right?

Nine. Your call to action. It is time to lace up.

Speaking of running, it is time to lace up.

Between Remembrance Day and Valentines Day, very little real estate gets done. During this time we have Christmas and the holidays, then too cold in January and February. But hopefully you are using your time wisely.

There is an old sales thing I like. It goes like this. It doesn’t matter if you are a gazelle or a lion, when the sun comes up on the Serengeti, you better start running. Here is your call to action. If you are thinking of buying or selling real estate this spring, now is the time to contact me.

Send me an email. We’ll have a chat.

Ten. I will leave you with this thought

The great thing about living in Kitchener Waterloo is that we are only 30 minutes away from Ontario.

Written By
Keith
More from Keith
Today, we look at some real estate trends and statistics.   Canada’s...
Read More