Today is January 14, 2016. This is the second episode of the Marshall Report. Welcome to the podcast.

In this episode I will talk about:

Remember last winter. There was a real fear that we were going to run out of salt for our roads (not that we should use it at all, it is bad for the environment and for our cars – but that is another discussion). This year, I think it is pretty safe to say that our stockpile of salt will be adequate to get though till spring. Sure we got some winter this week but most people think that winter started late and will be mild.

In a related thought, I’ve become strangely addicted to vanilla flavoured lip balm. It’s what happens when you only have daughters and no sons. You get soft and gentle.

I’ve also become strangely addicted to the social media website Quora where you can ask and answer questions with strangers. I was idly wondering the other day if peanut butter ever went bad. So I went to Quora with the question and asked a question into the void.

Turns out, it does, peanut butter does go bad, but takes a lifetime. What’s interesting about Quora is you get a chance to see how others think. For example, the answer to my question also said that if it were organic peanut butter, kept in the fridge it would only last for a few weeks. I never even considered organic peanut butter when I asked the question

I didn’t eat peanut butter during the six weeks I was in Asia, the six weeks before Christmas. It is noodles for breakfast in Vietnam, soy milk and steamed buns in Taiwan.

We get all kinds of real estate related questions around here at the boneless chicken ranch. This week’s question is…

Question: Is a king-sized bed too large for a 700 square-foot condo?

Answer: My answer, no way, the bigger, the better. A good night’s sleep is not only one of life’s pleasures, it is important to your health and productivity. I just got back from backpacking around Southeast Asia and I can tell you one of the things I really while I was away missed was my own bed.

Or, think about it this way. You spend 1/3rd of your life in bed. It should be as big and comfy as possible, right? It’s ok with me if your bed takes up a third of your living space.

Polo, as in Marco

There is an old joke that goes ‘I had to give up polo. My horse drowned’. Of course there is polo, water polo and now bicycle polo.

There is an indoor bicycle polo club in Kitchener Waterloo. From beginners to serious bicycle polo professionals there are places around KW to come out of the cold and play bike polo. They play pick up games on Thursday evenings all winter. That’s pretty wild. Maybe bicycle polo is the next ultimate frisbee. I remember when I first saw that many years ago. I remember thinking ‘how odd to turn a pastime into a sport.’

As always there are links to that club and all the stories in the show notes.

The local real estate statistics for 2015 have been released. Real estate agents get really excited about this kind of stuff. The general public, not so much. However, it is important to know sometimes where we are going, by looking back at where we just came from.

We live our lives forward, but understand them in reverse.

So here is what happened last year in Kitchener Waterloo real estate.

5,563 homes were sold through our local real estate board. That is a 5% increase in the number of sales over 2014.

3,576 were single detached. That is up 5% over the previous year

So sales of all types of real estate is up across the board.

They are up too.

The average sale price in KW increased by 4% over last year, actually it was 3.9% but why quibble? The average home sold price was  just under $350,000.

As ‘homes’ include all types of abodes, let’s break that down.

As the other markets are all publishing their local stats, with the price of gas dropping, I was wondering what happened in Calgary.

The number of homes sold dropped by a whopping 26%. However the average price is down by only 2.6%. So come on people, whose of you real estate bubble believers. Those of you who are waiting in vain for a price drop of 20%, let me say it one more time again. It is not going to happen. If you are waiting for prices to drop by 20%, you are procrastinating and living in a dream world of your own design.

This has nothing to do with real estate, but last week I was talking a bit about our local names, street names, school names… and then I ran across a story in the London Free Press that is related.

Some residents of London Ontario feel that the city has been hindering its own economic development due the confusion with London England, the city it was initially named in honour of.  There is a petition circling about and really the argument kind of makes sense. There is some anecdotal evidence that the city has lost business and lost face because of the confusion. 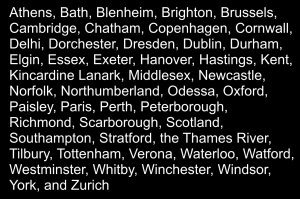 Of course London is not alone in sharing a name with an old country. Also found in Ontario are:

…to name a few

There is a new restaurant in Kitchener called Berlin, well its six months old now and it has an interesting menu.

Have we considered renaming Kitchener Berlin?

Here is a random thought.

When will you receive your first post card this year from a Realtor? Will it be February? Maybe March? I’ve noticed that all of my junk mail currently is for gym memberships and for fast food – It is that time of year when the gyms are full of new members. I guess the fast food franchises are just taunting us.

In a few short months, in the springtime, the neighbourhoods will be full of ‘for sale’ signs, mailboxes will be stuffed with post cards from local realtors.

It is all like migrating birds, there must be some kind of signal. But when is it? When do we start the real estate post card carpet bombing campaign? I think I will get my first one at about Valentines day. I’ll let you know

As you know, I love cities. I lived in Taipei for a decade. New York City is one of my favourite destinations. I’ve been to London and Paris and Istanbul and Delhi, and Singapore and Sydney, Hong Kong…Shanghai… you get the idea. I’d love to live in most of those. But I live in KW, which with a family is a much better choice. And I really do love living here too.

But last month when I revisited Taipei and Bangkok after many years away from both, something struck me instantly. Both cities have improved a lot in the last two decades and I suppose that is not unusual. When I was last in those cities, the countries were still ‘developing’. Now they have matured. Now there are developed.

With that in mind, I found this article in the Economist especially interesting. Three Canadian cities are considered by the Economist magazine to be the worlds most livable cities. Vancouver, Toronto and surprisingly for me at least Calgary. The ranking was based on 30 factors spread across five areas: stability, infrastructure, education, healthcare and environment.

What to buy and when to buy it

I guess it is because I spent six weeks living out of a backpack last year that one of the things I am trying to do this year is not buy anything. I know it is bad for the economy. If everyone was like me, civilization would crumble. But I have everything I need. I need more closet space. I need more empty shelves and table tops.

Buy the way, statically, the best time to buy a home is this week.

The cyclical nature of business

Ok, so here is this week’s call to action. It is actually two calls to action aimed at the two different sides of the purchase and sale agreement. That’s right the homebuyer and the seller.

If you are a homebuyer. My advice is to be patient. There is not a lot on the market right now. Don’t be in a hurry to buy (that is actually one of my 365 Rules About Real Estate).

For sellers, my advice is ‘hey wake up, there is nothing on the market right now. You should list, you have no competition’. I’m taking my own advice and finally selling a little uptown bungalow I’ve had for years and can’t ever seem to let go of. I’m listing it next week, for sure.

I will leave you with this thought

Always go to bed with a clean kitchen. It makes the morning so much nicer.

Written By
Keith
More from Keith
I get a lot questions on the chat widget. I like that....
Read More